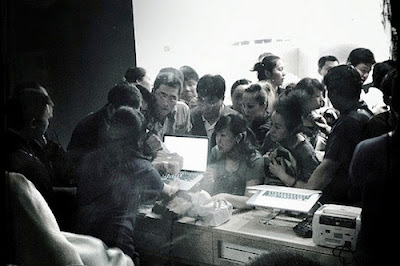 If you’re in China and you want to become a scalper, today’s the best time to do it. What’s shown in the image above is a scenario in the flagship Apple Sanlitun Store in  Beijing. People endlessly queuing just to get their hands on the Apple‘s latest offering in the iPhone line. As the Wall Street Journal puts it, the apparent shortage of the new iPhone 4 in China has led to the sudden increase of scalpers and their target market. Full story after the break.

But as of Thursday morning, Apple’s flagship store in Beijing’s Sanlitun Village mall was sold out of the new smartphone. As a result, scalpers, who bought up iPhone 4s earlier in the week, are now lurking outside the store ready to pounce on anyone who walks out without merchandise.

Working in groups, the scalpers lead willing customers to an empty stairway in the same mall, where their cohorts keep stacks of iPhone 4s in the original packaging. One scalper was offering the 16-gigabyte version of the device for 5,400 yuan, or about 795 dollars, a 10-percent mark-up over the sticker price.

This is quite surprising, considering that there as been a lot, and we mean a lot, of knockoff iPhones selling here and there in China with various gimmicks and features but as they say, nothing beats the original. A report from M.I.C gadget suggests that these scalpers continue to snug in iPhone units as fast as they’re getting restocked in the Apple store. This even led to tensions building up which also led to a temporary closure of the said store.

According to sources, the real customers and the iPhone 4 scalpers had a fight in the Apple store. A gang of scalpers were cutting the queue and some customers were fed up with the scalpers for buying large quantities of iPhone 4 and resell them outside the store. The police and Apple’s own security staff appeared to clean up the mess and due to the chaotic crowd, the store needs to be closed temporarily…

The report also claims that this apparent rise of scalpers is also due to the fact that the Apple stores allowed customers to have unlimited purchases when previously they’re only limited to two per customer. As a mitigating move, the four Apple stores in China are now requiring their customers to show some form of identification and limits the purchase to a single unit each. Also, store employees are now required to open and activate newly-puchased units on the spot so that scalpers can’t sell unopened iPhones anymore.