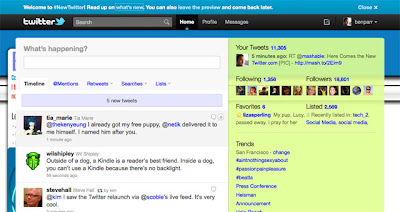 Twitter has finally made its announcement regarding the big change in its interface in years. Taking a closer look at the new layout should bring in pretty familiar reactions as many would notice that this is more or less the same layout being used by the iPad application. So basically, it’s the desktop application without the download. More information and pics after the break.

As with the iPad application, tweets are now seen in a timeline fashion for easier location of posts. Users can just browse through this timeline, do searches, retweet posts and others for easier access. If that’s not enough, they’ve also made a chuck-load of media partnerships to offer the best media experience possible in a social networking platform. Twitter has made connections with Dailybooth, DeviantArt, Etsy, Flickr, Justin.TV, Kickstarter, Kiva, Photozou, Plixi, Twitgoo, TwitPic, Twitvid, USTREAM, Vimeo, Yfrog, and YouTube to get content in from you and from the people you know to the timeline in the easiest way possible. 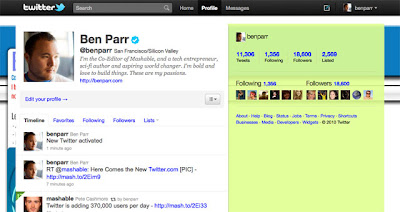 The New Twitter profile page shown above is now accessible with the “Profile” link at the top bar. The new page contains easy links to the user’s tweet statistics including how many follows him/her and how many does he follow. 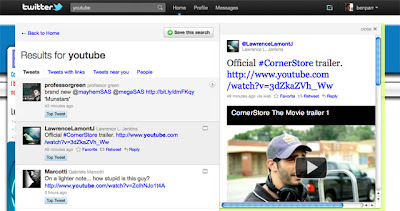 An example of the new media capability of the site is shown by doing a simple video search that brings all items in the left pane. Clicking on each expands the right pane to show the actual video itself.

Users may start to feel the new experience as soon as tonight but officially, “it will roll out as a preview over the next several weeks”.