Oh Internet Explorer… a browser that has more or less 52% of the total internet usage share. Some may accept that figure, some may not. Clearly for Microsoft, they wanted to raise that figure further through Windows Internet Explorer 9, which has launched its public beta. For those who think that IE9 is that same IE they’ve loved to hate, then they’re in for a treat as notable changes include a major strip-down of the interface, HTML 5 and standard support among others. More after the break. 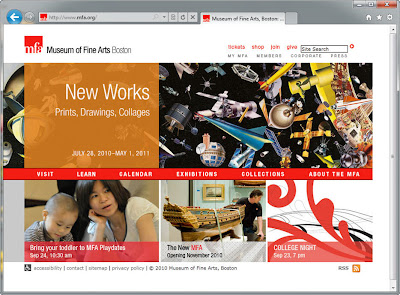 Now, it is actually possible to put “Internet Explorer” and “excellent browser” in a single sentence. In terms of aesthetics, it may now join the ranks  of Firefox 4 and Chrome  for having a stripped-down interface. Such changes include the placement of the tabs beside the location bar that would minimize the space covered by the user interface itself. Access to the other features of the browser are available through the 3 icons that appear on the upper right hand side. One for managing the home page, another for managing favorites and finally, a button that gives access to all other options for the browser.

It is also highly integrated into Windows 7

by allowing sites to be pinned to its taskbar. The location bar and search bar have been incorporated into one as well that would also allow navigation to your bookmarks as well as your history. 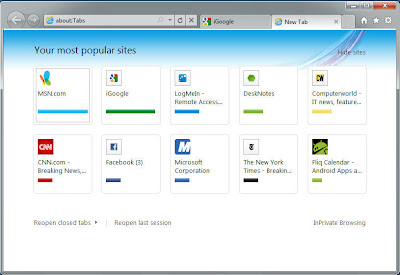 Just like Chrome, opening a new tab IE9 brings a page containing thumbnails to your frequently visited sites, instead of a blank page. Also, each thumbnail shows how frequent that particular site is being visited.
Speed is one aspect that has kept users away from IE, lagging behind the competition in the SunSpider Javascript Benchmark. To compensate, IE9 introduces a new JavaScript engine “Chakra” for those heavy script-reliant sites and services. Hardware acceleration  is also used – which would enable the browser to run applications, like games, within. Full support for new web standards are also integrated like CSS3 and HTML 5’s video/audio tags and canvas element, for animated 2D polygons and text support.
After all that’s said, Windows Internet Explorer 9 is still very much in beta. Bugs are to be expected and more features may be added/removed. But one thing is certain. If Microsoft will continue in this path for their flagship browser, then Firefox and Chrome might actually have a good competition to deal with in terms of web experience.

Windows Internet Explorer 9 is only available for Windows Vista and Windows 7 users.