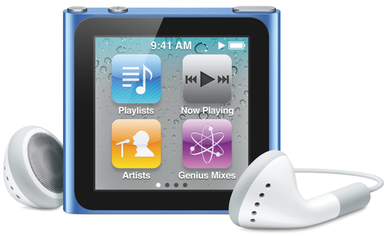 , thinking back 2005 since its debut we got here the first complete redesigned product. We obviously see that the clickwheel was gone together with its light, slim form factor and larger screen display. The new nano is set forward with touchscreen and dedicated operating system, looking like an infused old shuffle and iPod Touch. We compiled a series of reviews after the break.

The good: The iPod Nano (sixth generation) is nearly half the size of the previous model, uses unique multitouch screen navigation, and includes a built-in clip.
The bad: Many features have disappeared, including video playback, camcorder, microphone, speaker, games, calendar, contacts, notes, and alarm clock. The touch-screen interface is overkill, requiring more attention than the time-tested click wheel design without delivering many practical benefits.
The bottom line: The sixth generation of the iPod Nano is the smallest yet, but it comes at the expense of valuable features and practical controls.

Ultimately, if you’ve had the same iPod nano for the past few years, this new device will probably make you feel like you need a replacement. While there isn’t slew of fresh additions (in fact, there are notable subtractions), the re-think about what the nano is supposed to be feels right to us. It’s still not exactly your cheapest option if you’re looking for pure MP3 playback, but something tells us that if you’re looking at the nano, you’re living in Apple’s ecosystem, and that makes this a pretty attractive choice. We ultimately would like to see the capacities on these guys grow a bit, and those prices drop, but there’s no sticker shock here. The new nano is a smart, fast, capable player that should please a lot of people looking for something new this holiday season.

The new iPod nano is a bit of an enigma. On the one hand, its size and touchscreen interface are sure to generate oohs and aahs, and in many cases provide genuine—and substantial—benefits. On the other hand, the new interface suffers a bit from being confined to a tiny screen, features found on previous models are missing, and the lack of physical playback controls (or at least Apple’s inline-remote earbuds, standard on last year’s model) means the device is less usable than it could be, especially in precisely the environments where it should excel: at the gym and on the go. A slightly larger screen and either basic physical playback controls or Apple’s remote-equipped earbuds would have made for a stellar music player, despite the “lost” features.
Perhaps it’s better to think of the new iPod nano as version 1.0 of a completely new device, rather than the sixth generation of an existing iPod. If you’ve always wanted the touchscreen interface of the iPod touch on a smaller, audio-only device, the new nano is a pretty good 1.0 product, but it’s got enough room for improvement that I’m already looking forward to next year’s model.