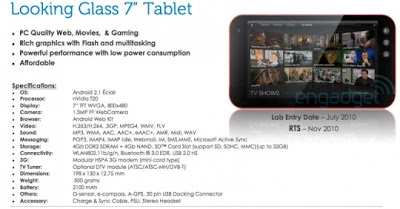 Looks like we have a new standard for tablets… the 7-inch standard. First was Samsung’s Galaxy Tab, then Apple followed suit with the iPad 2, then recently, Dell‘s CEO Michael Dell gave a hint of what appears to be their entry to the foray which is consequently powered by Google’s Android mobile operating system. Amidst the fact that their initial offering, the Dell Streak, hasn’t been in the market for that long, they are already working on this “other” range of tablets.
Although Dell hasn’t given any detailed information regarding this, specifications of the new tablet may have been leaked through several documents from the company. Named the “Looking Glass“, it will run on Android 2.1 using Nvidia’s Tegra 2 chipset. It will employ a 800×480 touchscreen — which you can use to watch TV with its optional ATSC/DVB-T tuner. For power, it utilizes 4GB of RAM + ROM, for expansion, it has an SDHC slot up to 32GB. Interconnectivity is achieved through 802.11b/g/n WiFi connection, Bluetooth 3.0 and optional 3G HSDPA. Finally, it has the mandatory camera having 1.3 megapixels.
Those aforementioned are the ones rumored for the Looking Glass, but it is also possible that Dell was pertaining to another device. Please take this with a grain of salt.