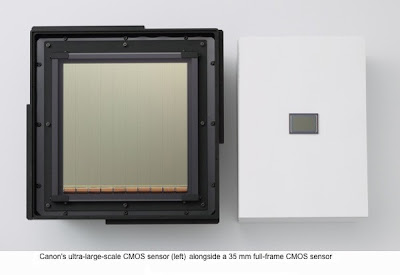 As a DSLR user, you’ll know the hard time of taking photos in darkness, but we got here something big from Canon, literally the largest CMOS sensor 202 x 205 mm (7.95 x 8.07 inches) capable of gathering maximum light to one one-hundredth the amount of light required by a professional DSLR

. And yes, common videographer would be stunned with it video capturing capabilities of 60fps just 0.3 lux of illumination –ooh did we say shooting a music video under full moon. There will be new circuitry to matched the sensor for this video capturing. Check out the press release after the break.

Press Release
Canon succeeds in developing world’s largest CMOS image sensor, with ultra-high sensitivity
TOKYO, August 31, 2010-Canon Inc. announced today that it has successfully developed the world’s largest*1 CMOS image sensor, with a chip size measuring 202 x 205 mm. Because its expanded size enables greater light-gathering capability, the sensor is capable of capturing images in one one-hundredth the amount of light required by a professional-model digital SLR camera.
At 202 x 205 mm, the newly developed CMOS sensor is among the largest chips that can be produced from a 12-inch (300 mm) wafer, and is approximately 40 times the size of Canon’s largest commercial CMOS sensor.*2
In the past, enlarging the size of the sensor resulted in an increase in the amount of time required between the receiving and transmission of data signals, which posed a challenge to achieving high-speed readout. Canon, however, solved this problem through an innovative circuit design, making possible the realization of a massive video-compatible CMOS sensor. Additionally, by ensuring the cleanest of cleanroom environments during the production process, the sensor minimizes image imperfections and dust.
Because the increased size of the new CMOS sensor allows more light to be gathered, it enables shooting in low-light environments. The sensor makes possible the image capture in one one-hundredth the amount of light required by a 35 mm full-frame CMOS sensor, facilitating the shooting of 60 frame-per-second video with a mere 0.3 lux of illumination.
Potential applications for the new high-sensitivity CMOS sensor include the video recording of stars in the night sky and nocturnal animal behavior.
Through the further development of distinctive CMOS image sensors, Canon will break new ground in the world of new image expression, in the area of still images as well as video.
*1 As of August 27, 2010. Based on a Canon study.
*2 The approximately 21.1 megapixel 35 mm full-frame CMOS sensor employed in the company’s EOS-1Ds Mark III and EOS 5D Mark II digital SLR cameras.
*3 Approximately one-half the brightness of a moonlit night.