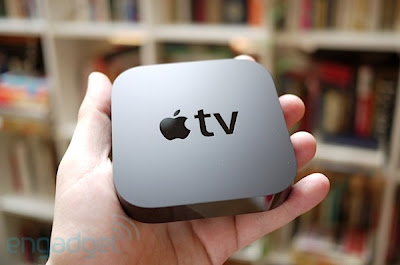 Here it is, Apple‘s 2nd offering of their set-up box for providing content into the couch potatoes within each of us… the new Apple TV. Priced at $99, this black curved box that fits perfectly into your palm offers new functionality as compared to their previous offering. One is their rental service that allows you to watch new shows for a limited time for $0.99 per episode, then high definition movies at $4.99. Another new function, one that they call as “AirPlay” allows the pull-off audio/video content from your iPod/iPad/iPhone to your Apple TV with a push of a button. Content from your computers/laptops onto your TV is also simple through this thing. These and more after the break with the review of the new Apple TV. 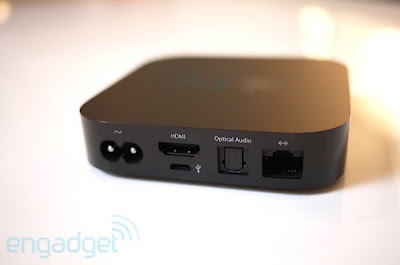 As mentioned earlier, this handy-dandy TV accessory fits into the palm of your hand. Dimensions for this round-cornered black box is at 3.9-inches/side, 0.9-inches thick and weighing only 0.6 pounds. That’s pretty small by our definitions, given that the previous version was about 3 times larger — eliminating any problems that might involve shelf space. This, then combined with the minimalistic approach that Apple is taking with their gadgets creates an overall feel of simplicity with touches of elegance.
With the image above, connections are accomplished through an Ethernet port, a micro-USB slot which they claim is for “service and support”, an Optical Audio input, HDMI for your usual hi-def content and your mandatory power cable. The exact specifications are still unknown at this point but we’ll be showing a dissection of this box later for your satisfaction. One thing we can say is that the same chip that powers your iPhone 4, the new iPad and the iPod Touch also powers this box with an A4 CPU clocked at 1 GHz. Wireless connectivity is also achieved with 802.11a/b/g/n WiFi.
Remote Control Unit 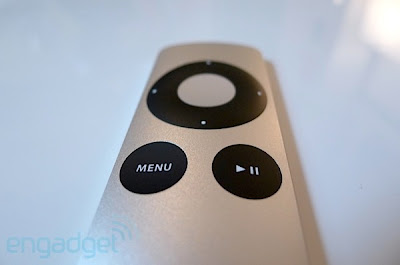 The minimalist motif continues with the remote control for the Apple TV. Made out of aluminum, it sports a button for the menu, play/pause and a 4-way rocker + center button. This may introduce complications especially when you’re trying text input. On a lighter note, just a little nitpick as to why they decided to use black on silver instead of the other way around for consistency, but again, just a little nitpick.
If you don’t want to use this as remote control, Apple has just released an update that enables the use of an iPod/iPhone/iPad to control your Apple TV. This allows for better control through the on-screen keyboard that’s included in the app.
Interface + Content 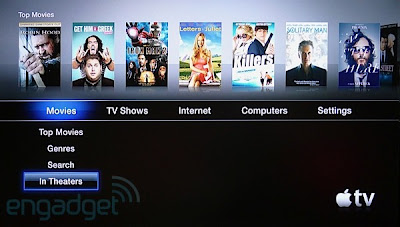 The general interface is what appears in the capture above, you’re presented with a series of menus for Movies, TV Shows, Internet, Computers and Settings, each having a list of options to select from. Selections for Movies/TV Shows allows you to buy or preview content, rate selections or add a particular selection to your wish list. All in all, you don’t have to be a rocket scientist to grasp the overall interface and control it.
Setting up your Apple TV is also fairly simple, you just need to sync it with your iTunes account and you’re good to go. Although as mentioned in the remote control, text input can be cumbersome as it is done through a long list of letter presented to you instead of a QWERTY-like keypad.
As for the content themselves, they’re relatively easy to rent. For movies, you are given a day to watch them while 2 days are for TV shows. Unwatched content are then stored for 30 days. Renting content is also not limited to the Apple TV as you can do them with your iPod/iPhone/iPad. But, you can’t do it the other way around. 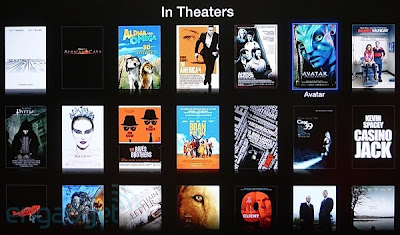 Content providers are limited to ABC, Fox, Disney and BBC for your television viewing. How about downloaded content like your AVIs, MP4s MOVs and MKVs? Well, get your converters ready as the Apple TV only accepts MP4s (or M4Vs) and MOVs. And did we mention that they’re all up for rentals only? Yes, they apparently have no means of providing a location for your purchased items that you can watch anytime. Well this is maybe due to the fact that Apple doesn’t yet have a firm hold over its media partners, something that they need to take care of if they’ll be continuing with this service.
AirPlay 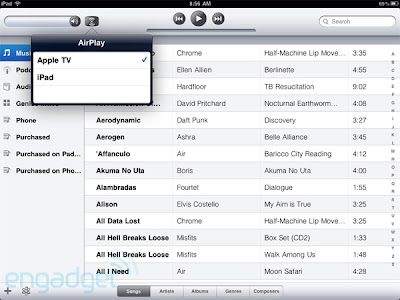 What AirPlay basically does is it allows you to move content from your iPod/iPhone/iPad over to the Apple TV in realtime. That includes streaming media as well like YouTube — instantly beaming what random video you’re watching onto the TV. Although at the moment, the current AirPlay can only do it to audio with the full implementation coming in November. So until then, let’s see what Apple can do, especially when they told that you can multitask on a device you’re pushing content from.
Audio/Video/Image Quality 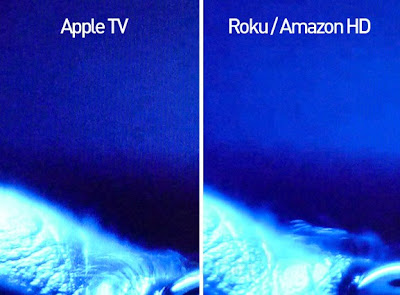 Shown above is a comparison between the video outputs received from the Apple TV and the other from Amazon on Roku‘s XDS. Although compression artifacts are still present, they’re handled better in the former. With the latter having its details blurred due to the noticeable blocks. As for sound, from stereo 2.0 to surround 5.1, Apple TV takes the cup here. Although it still depends on your sound system setup, but for $99, you’re getting the item’s worth and more in terms of sound quality.
Dissection! 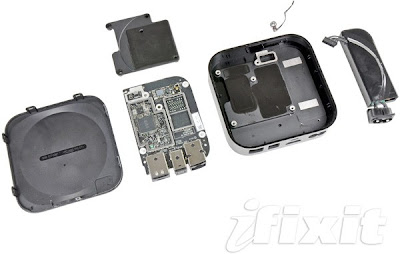 In trying to see what’s actually inside this small matte-black box, here’s a dissection of the Apple TV. And after that horrendous task, here’s what we can see from the “aftermath”. There’s a Samsung K9LCG08U1M NAND Flash chip that gives it 8GB of storage – with the same found in your good ol’ iPad. Not so surprisingly enough, the same markings are also in the Apple A4 processor that it uses as with the iPad and the new iPod Touch. Examination reveals that the K4X2G643GE is the exact Broadcom BCM4329XKUBG 802.11n WiFi / Bluetooth / FM chip as the iPad but not with the iPhone. RAM is also at 256MB, again same with the others.
Conclusion 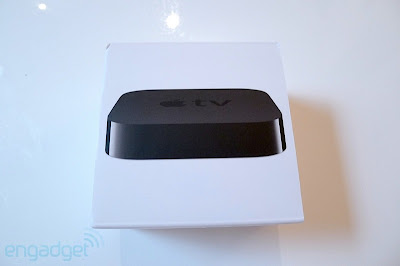 For one, on the form factor, it’s very solid. The minimalist design, the small dimensions, make it a perfect device to put on top of your TV, well not literally on the top, but you guys get the picture. The quality of the video/audio it presents is superb. The main drawback to this product however, is the service. With the few media partners that Apple has at its sleeve at the moment, then we’ll have a problem at that. At $99, its definitely on the cheap side of things and very simple as well, but simplicity and being cheap alone isn’t going to be enough for Apple if they wanted to dominate this market.

Given in the dissection of the Apple TV that it has more or less similar hardware components as with the iPod/iPhone, it comes to no surprise that the Apple TV will follow suit for be jailbroken.