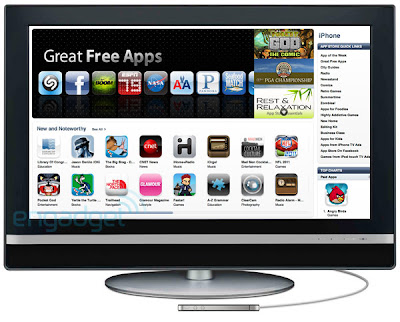 Apple‘s plan of revealing a revamped “Apple TV” have seen further development with Engadget report that the previous suggested an iOS-based device at a price point of $99 with limited onboard storage that would be capable of 1080p playback have changed. Now it would lose 1080p playback but gain applications and would be renamed to iTV.

Well we’ve gotten a little more info on the project, and it’s not all good. Apparently the box won’t be capable of handling (or enabled to handle) 1080i or 1080p video. Instead it will only push out 720p clips. The word — and cause for much internal debate, we’re told — is that this has something to do with the A4’s inability to crank on higher resolution content, but we don’t see how that’s possible considering the iPhone 3GS could play back full HD video. Furthermore, the device will be getting apps and presumably an App Store entry, though it’s unclear if there will be cross-pollination between iPad and iPhone / iPod touch offerings and new Apple TV applications.

Another notable thing on this story is Apple is reportedly renaming the Apple TV to “iTV”. This was a little bit off now, since their now conflicting brand name, with iTV (itv.com). But back in September 2006, Apple initially announced its set-top box product as “iTV”, as usual we could normally see scenarios of Apple get sued, vice versa.
One more thing, the 1080p, this could be another Apple tactics we almost see on their products such the iPhone, iPhone 3G/3GS and iPhone 4 –Apple will be setting this feature on the next iteration of Apple TV, most likely lure some more Apple-lovers to upgrade or buy the latest one with 1080p?
Let’s just wait until this Apple products hit the shelves.