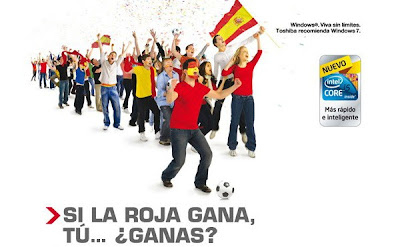 “Buy a Core i5 laptop or a Toshiba TV, and if your country wins the World Cup Final, we’ll refund your money.” Toshiba ran this advertising campaign in Germany, England, Portugal, Italy and Spain to jive with the hype of the World Cup football phenomenon. However, after each nations rushed to buy any of those Core i5 laptops or Toshiba TVs refunds seem remarkably hard to come by.
According to Engadget via Facua.org, “the small print on that ad included instructions to see Toshiba’s site for further details, which elucidated a requirement that all claimants must register their product by the 17th of June.”
Spain crowned the World Cup Champion, that cause a full-blown football-field-number of Spanish fans who joined Toshi’s promotion feeling that they’ve been cheated, apparently this took the attention of big time consumer association Facua arguing that in the absence of the major condition of registering online on the promotional materials, Toshiba should honor everyone’s receipts irrespective of registration.
Now who’s to blame, Netherlands? (we kid), now we’re starting to feel being cheated too, so we think Toshiba should clean this out to clear its brand name, not just from Spain but mainly to all its consumers. Spaniards who have joined this Toshiba’s promo let us hear your comments on the form below.