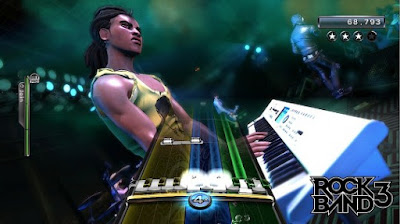 will be available later this year, probably targeted for the Holiday Season shopping. Now it’s every music-loving child number one listed on their Santa’s wish list. Accordingly, Rock Band’s title will ship on October 26th in North America, with the Wii, PS3 and Xbox 360 versions priced at $59.99 sans hardware and the DS rendition at $29.99. If you’re a bit inclined on rocking the town, we have the press release after the break.


With more than 30 awards and nominations following its impressive E3 2010 debut, including multiple Best Music and Best Casual/Social game accolades, Rock Band 3 will feature an incredible 83-song setlist and access to far more music than any other music game, as well as innovative new gameplay modes and instruments. The game will ship on October 26, 2010 in North America for the Xbox 360 video game and entertainment system from Microsoft (MSRP: $59.99), PlayStation 3 computer entertainment system (MSRP: $59.99), the Wii system from Nintendo (MSRP: $59.99), and Nintendo DS (MSRP: $29.99).


· Burning Down the House by Talking Heads


· My Own Summer by Deftones


Walmart.com shoppers who reserve Rock Band 3 for PlayStation 3 system, Xbox 360 and Wii in advance will receive a $10 eGift card for a limited time.


Developed by Harmonix, the world’s premier music videogame company, published by MTV Games, and distributed by Electronic Arts Inc. (NASDAQ: ERTS), Rock Band 3 will ship simultaneously worldwide in North America, Europe, Australia, New Zealand and other territories. Rock Band 3 will be compatible with all Rock Band™ and The Beatles™: Rock Band™ peripherals, as well as most Guitar Hero® and third-party instrument and microphone controllers. Mad Catz is the official peripheral manufacturer and distributor for Rock Band 3 game controllers.


The Rock Band platform stands next to none in music content, with 2000 songs scheduled to be available at the launch of Rock Band 3, including Jimi Hendrix, The Who, AC/DC and Green Day – all exclusive to Rock Band. With more choices for fans than any other music-based videogame, Rock Band is, without question, the industry leader in providing the best selection of interactive musical content, songs and artists. Rock Band pioneered offering content in a variety of ways, through on-disc gameplay, game export, downloadable content and the Rock Band Network. The Rock Band platform allows fans to interact with their favorite music in a unique and hands-on way, as well as giving artists the ability to reach fans through a whole new channel.