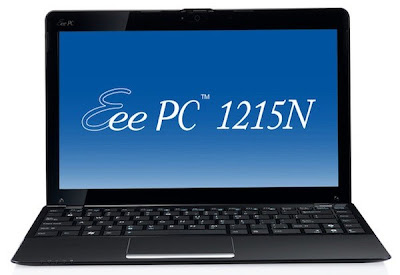 How cool is your laptop? If you would tell us that you have the most powerful laptop, then we’ll follow up on how bulky, toasty or heavy it is? Then what more can you say if your netbook is this powerful, packed in a 12-inches frame, Asus Eee PC 1215N

will freak you out with 1.8GHz dual-core Intel Atom D525 processor along with NVIDIA Optimus that intelligently switch between its NVIDIA Ion discrete and integrated graphics (fits 1080p video on its screen display resolution/HDMI out).
In addition to this so-called netbook other features include, Bluetooth 3.0, 802.11n WiFi, integrated webcam with lens cover, choice of 250GB or 320GB hard disk drives with added ASUS WebStorage so you can make it up to 500GB, and the ability to charge connected devices via USB even powered off.
As of now there is still no words on its price and availability plus we think for this powerful type of netbook we should look at the battery life, in which there no details right now. We’ll keep you on that soon.

ASUS Defies Convention with the Eee PC™ 1215N Multimedia Netbook
Effectively Integrating the Intel® Atom™ D525 CPU with Next Generation NVIDIA® ION™ Discrete Graphics to Deliver Unprecedented Performance
Consumers who want their multimedia entertainment on-the-go have always found their needs wanting. But that is set to change with the launch of the ASUS Eee PC™ 1215N Multimedia Netbook. ASUS has managed to squeeze the Intel® Atom™ D525 processor and the next generation NVIDIA® ION™ discrete graphics processor into a netbook to deliver stunning levels of performance. It also comes with the latest USB 3.0 and Bluetooth 3.0 technologies.
Unprecedented Performance Meets Energy-Efficiency
The Eee PC™ 1215N defies the notion of netbooks being designed just to cater to basic computing needs. The 1215N packs the Intel® Atom™ D525 dual core processor, as well as the next generation NVIDIA® ION™ discrete graphics processor with NVIDIA® Optimus™ technology to deliver a netbook with hard-hitting multimedia performance capabilities.
NVIDIA® Optimus™ technology intelligently switches between integrated and discrete graphics to provide the optimum graphics solution required, thereby extending battery life in the process.
Delivering Multimedia Enjoyment in Droves
The next generation NVIDIA® ION™ discrete graphics processor found in the Eee PC™ 1215N enables it to deliver a visual experience never before seen on netbooks. The 1215N is capable of smooth, crystal-clear playback of high definition videos in 1080p on its 1366 x 768 HD widescreen display with 16:9 display ratio.
Hardware decoders embedded within the 1215N perfectly decode H.264, VC1 and MPEG2 file formats while the HDMI-output port enables Full HD 1080p playback on large screen displays.
The 1215N also features a camera cover over the webcam’s lens to give users added privacy.
High Speed, Efficient Connectivity
The Eee PC™ 1215N comes packed with features designed to deliver an efficient computing experience to supplement its multimedia prowess.
USB 3.0 will let users transfer files at up to 4.8GB per second, almost 10x that of USB 2.0; while Bluetooth 3.0 lets users sync up with a myriad of digital devices at speeds that are 8x faster than that of Bluetooth 2.1.
802.11n Wi-Fi connectivity gives users faster surfing speeds and higher throughput when compared to 802.11b/g standards.
The 1215N is also capable of charging mobile phones via USB even when the Eee PC is switched off. The mobile phone can also draw power from the Eee PC’s battery.
Cloud Access Anytime Anywhere
The Eee PC™ 1215N’s 250GB or 320GB hard drive is supplemented by 500GB of ASUS WebStorage. Users can simply store files via a simple drag and drop interface.
ASUS @Vibe comes pre-installed in the 1215N and is a one-stop repository for various software and applications. It gives users access to music, videos, radio stations, and other forms of online entertainment whenever they please. ASUS @Vibe contains both localized and international content. These entertainment services are updated periodically and are available on a free trial.
The 1215N features LocaleMe, an application that leverages on Microsoft’s Bing map. It helps users pinpoint their exact location, as well as provide information about the surrounding areas. Users can use LocaleMe to find addresses and route directions.
Eee PC™ 1215N users are also granted access to Boingo global Wi-Fi services at a special price. A single account gives users access to over 100,000 hotspots at airports, hotels, cafes and restaurants around the world.