Skip to content
TechGeeze > Apple iPhone 4 more than 600,000 Pre-Orders in one day 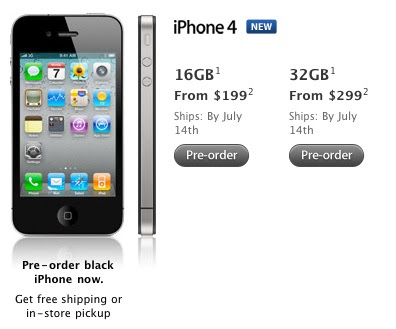 Apple lovers have their story of disappointments during the iPhone 4 pre-order has begun. Why the device unavailability moves for July with just few hours of open line taking order –with early  adopters  encountering  difficulties taking orders and approval. The reason –massive pre-orders of about more than 600,000 on a single day shake the system malfunctions.

Apple has issued a statement to explain many order and approval system malfunctions.

Yesterday Apple and its carrier partners took pre-orders for more than 600,000 of Apple’s new iPhone 4. It was the largest number of pre-orders Apple has ever taken in a single day and was far higher than we anticipated, resulting in many order and approval system malfunctions. Many customers were turned away or abandoned the process in frustration. We apologize to everyone who encountered difficulties, and hope that they will try again or visit an Apple or carrier store once the iPhone 4 is in stock.