Who could have predicted from years ago that virtual farming (Farmville) would be one of the most lucrative businesses on the Internet? Business Insider reveals Zynga’s company valuation to top $4 billion. This was surprisingly unexpected given the massive declined of MAU (Monthly Active Users) for some Zynga major games including Farmville.

Zynga owns some of the hottest games on the internet and its massive hosts Facebook which includes Farmville, Mafia Wars, Treasure Isle and Friend for Sale. The company’s profit comes from advertisers of the game and other creative ways, example for Farmville we see some “brand-sponsored crops” get planted by its 80 million farmers. 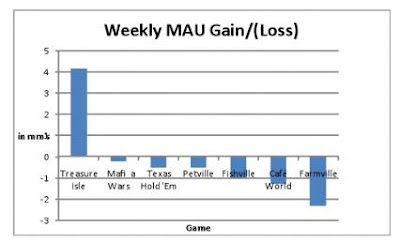 Though we see some major fall on MAUs from Zynga’s games, if and then the company’s plan to expand on mobile platforms like the iPhone, iPad and Android devices moves on, the valuation make sense at all.