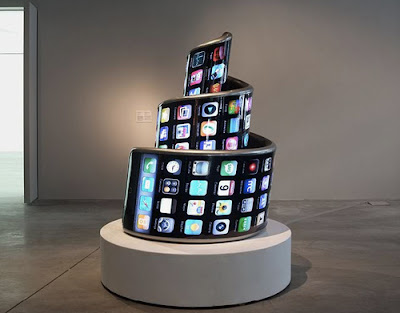 An iPhone tower inspired by Tatlin’s Tower (a Constructivist monument to modernity that was never actually built) was another creative and artistic collection from Russian Electroboutique. The Giant iPhone tower was erected to highlight the relationship between art and industrial design.

It looks like a giant iPhone slap bracelet right but according to Electroboutique the work of art is intended to draw attention to the elusive intersection of art, design and consumerism.

A giant distorted iPhone 3G, shaped as Tatlin’s Monument to the 3d International. Tatlin’s work is considered one of the avant-garde icons, whereas iPhone is a bright techno-consumerist icon of today. Back in the 20’s of the last centuries avant-garde artists have invented design as a way to bring art into people’s homes. During the 20’s century designers were gradually taking artistic ideas and implementing them into product design. Today we see companies claiming their products are art objects themselves; art has to re-define its role in the society again. The Monument to 3G links together the beginning and the current state of nearly a century of art-to-design dialogue and follows the strategy of re-claiming the designers’ ideas back into art.