Skip to content
TechGeeze > Intel officially unveiled Core i3, i5 and i7 ULV processors for ultra-thin laptops 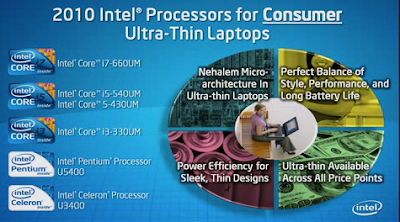 Now we want a Macbook Air refresh! Do you? Well, recently Intel officially outed their ultra-low voltage Core i3, i5 and i7 processors. It is mainly intended for those less than an inch thick laptops.

This new ULV series will not be replacing the existing Celeron and Pentium ULVs. Though Intel doesn’t fully shared the specs the new 32-nanometer Nehalem chips are claimed to have 32 percent better performance than previous ULVs that concludes a 20 percent power reduction versus the 2010 CPUs. You don’t have to worry, these new ULV-procs will get the same Turbo Boost and Hyper-threading performance advantages.

You should wait later this June for its release and maybe a handful of thin-laptops mounted by this new ULVs from Lenovo, Aces and Asus.