Microsoft Windows 7 seemed to be selling hotcakes hitting 100 million OS licenses mark; however this was as opposite trend with MS Internet Explorer who’s having a hard time pulling up –knowing the browser is still bundled on the new OS. Even the IE still holds the largest share on the browser market; Google Chrome was crowned the fastest growing web browser according to Net Application report. 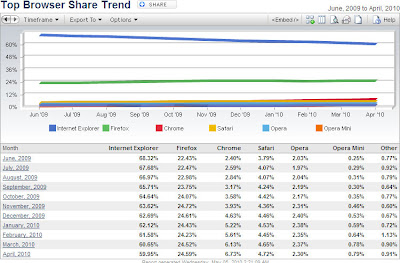 In the end, still it’s a win-win for Chrome having a major lift on its percentage while a major slump still plague Internet Explorer slipping on. While Firefox and Safari still have seen major growth but positively growing slow, stagnant as it is.
Though we are bit excited for Internet Explorer 9 with its HTML5 stuffs, the down fall of IE serves as karma for monopolizing the browser industry, why? It’s not fair for browser competition to pack IE with their main business –the OSes.