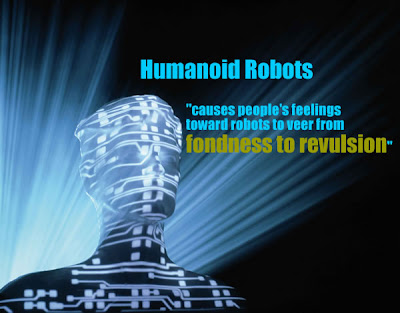 “An oft-cited theory in robotics, the uncanny valley, refers to that point along the chart of robot–human likeness where a robot looks and acts nearly—but not exactly—like a human. This subtle imperfection, the theory states, causes people’s feelings toward robots to veer from fondness to revulsion.” –cited in a post by Popular Mechanic’s The Truth About Robots and the Uncanny Valley: Analysis. Thought it was interesting to know where the humans have now explored the uncanny side of robotics, though it was a little bit creepy to tell that “it wasn’t movie-like” but apparently there are possibilities that in the near future we’ll have a humanoid counterparts. In this post we listed the latest humanoid robots that have been developed. Demo and development videos after the break, then don’t be scared.

Geminoid-F
The robot, Geminoid TMF, can move its rubber facial skin to imitate a smile, a laugh showing teeth, and a grim look with furrowed brows, by receiving electric signals from the person it is modelled on.

An Actroid is a humanoid robot with strong visual human-likeness developed by Osaka University and manufactured by Kokoro Company Ltd. (the animatronics division of Sanrio). It was first unveiled at the 2003 International Robot Exhibition in Tokyo, Japan. Several different versions of the product have been produced since then. In most cases, the robot’s appearance has been modeled after an average young woman of Japanese descent.
The Actroid woman is a pioneer example of a real machine similar to imagined machines called by the science fiction terms android or gynoid, so far used only for fictional robots. It can mimic such lifelike functions as blinking, speaking, and breathing. The “Repliee” models are interactive robots with the ability to recognise and process speech and respond in kind.
Robonaut
Robonaut is a humanoid robotic development project run from the Dextrous Robotics Laboratory at NASA’s Johnson Space Center in Houston, TX. The core idea behind the Robonaut series of robots is to have a humanoid machine to work along-side astronauts. Its form factor and dexterity are designed such that Robonaut can use space tools and work in similar environments to suited astronauts. Robonaut is a different class of robot than other current space faring robots. While most current space robotic systems focus on moving large objects, similar to a crane, or rovers for exploration, Robonaut’s focus is on tasks which require more dexterity.
TOPIO
TOPIO (“TOSY Ping Pong Playing Robot”) is a bipedal humanoid robot designed to play table tennis against a human being. It has been developed since 2005 by TOSY, a robots firm in Vietnam. It was publicly demonstrated at the Tokyo International Robot Exhibition (IREX) on November 28, 2007. TOPIO 3.0 (the latest version of TOPIO) stands approximately 1.88 m tall and weighs 120 kg.
Nao
Nao (pronounced “now”) is an autonomous, programmable and medium-sized humanoid robot, developed by the French company Aldebaran Robotics, a start-up headquartered in Paris.
Although the Nao Academics Edition is already available for universities and laboratories for research purposes, it will not be available to the general public until 2011.
ASIMO
ASIMO (アシモ, ashimo?) is a humanoid robot created by Honda. Standing at 130 centimeters (4 feet 3 inches) and weighing 54 kilograms (114 pounds), the robot resembles a small astronaut wearing a backpack and can walk or run on two feet at speeds up to 6 km/h (4.3 mph), matching EMIEW.[1] ASIMO was created at Honda’s Research & Development Wako Fundamental Technical Research Center in Japan. It is the current model in a line of twelve that began in 1986 with E0.
EveR-2
EveR-2 is the successor of EveR-1, which performed at Robot World 2006 in Seoul, has improved vision and ability to express emotions, as well as various other enhancements. Boredom is now an available emotion, along with the usual joy, anger, sorrow, and happiness. She sang the Korean ballad “I Will Close My Eyes For You” during the opening ceremony at the Robot World 2006 conference in Seoul, which made her the first android singer in the world.