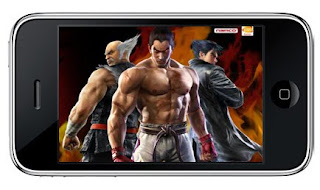 Decade ago, when we are just pre-schools Namco have released Tekken and today the game symbolizes the successful journey not just the game but as well as the company. As the game go on, different platforms emerges from home consoles, handheld portables up to old arcade machine we know. As we speak, Namco has confirmed that Tekken game will hit iPhone App Store soon.

Apparently I’m not teasing you to get excited, but the game was in its final stages of development. The thing that only bothering me is how the game will be on iPhone’s small screen? But if Namco will be unveiling Tekken which compatible for iPhone, iTouch and iPad, definitely it will be a push for iPad as a gaming device, why? It has a larger touchscreen for portables that will make an ease of handling and controlling the game.

Right now major details are still in secrecy including the release date, price and features to go on with the app. Notable details that we’re still missing were if the app will be a completely new game, a remake of existing PSP Tekken 6

Accordingly, Capcom was also set to release Street Figther IV game app for iPhone. This is where the competition on the game app starts comparing which is better Tekken or Street Fighter? Feel free to tell something at the comment form.