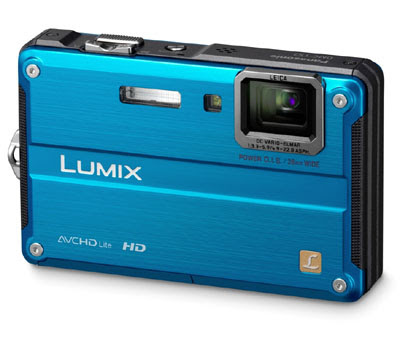 Those with an interest in Panasonic’s LUMIX range of cameras had better sit up and take notice, as the firm have just released details of a forthcoming addition to the range – and it looks like a proper hard nut…

The Panasonic LUMIX TS2 has obviously been built with the adventurous sort in mind – it’s waterproof to 33 feet, frostproof to 14 degrees Fahrenheit, and can survive drops of up to 10 feet – although we don’t recommend you try all three at once!

The camera comes equipped with a 14 Megapixel sensor and a 4.6x optical zoom, and also features an integrated LED light for underwater shooting, meaning that not only is it rugged, it’s well equipped – ideal for those of us who enjoy and adventure holiday, or want to take pictures in an environment a little less stable than a studio.

The TS2 also has the ability to record video in High Definition, and even extract 1920×1080 still images from 1280×720 video using Panasonic’s Intelligent Resolution technology, and will also accept SDXC cards, which increase the potential capacity and data transfer speeds currently available with SD cards – Don’t pay too much for memory however, Moneysupermarket.com have a comprehensive price comparison service which can find you the best prices in moments.

We’ve not seen many cameras so obviously built with the mountain climbing, deep-sea diving, sky diving community in mind, but it’s fair to say that as long as the TS2 delivers on the promises that Panasonic have made, we might be making room for a new compact some time soon!

Written by the Cameras and Camcorders team at Moneysupermarket.com