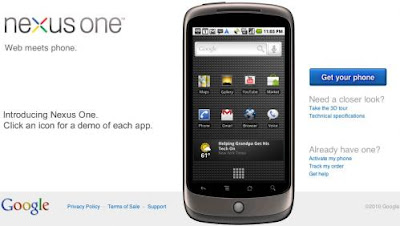 Google has just announced the launch of the carrier handset of its so called “superphones” based on Android OS –the Google Nexus One. It utilizes Qualcomm’s 1 GHz Snapdragon processor running Android 2.1 operating system boost with 800×480 screen and 5 megapixel camera with flash.

I don’t know why it is considered one of Google’s so called “superphones”, which I may say over rated. Nexus One also offers voice recognition throughout the operating system and advanced widget and home screen personalization. The handset is also mounted by a 512 MB of Flash and 512 MB of RAM, and ships with a 4 GB Micro SD card with support for cards up to 32 GB.

As earlier revealed, Nexus One is priced at $529 or with 2-year contract with T-Mobile at $179. Meanwhile Verizon (U.S.) and Vodafone (Europe) subscriber will still have to wait till Spring to grab the new device. Unfortunately initial orders are available only for United States, United Kingdom, Singapore, and Hong Kong.

Now let me know if you would act like Superman to have this “SuperPhone”? Please share up if you have grab Nexus One, just below at the comment form.