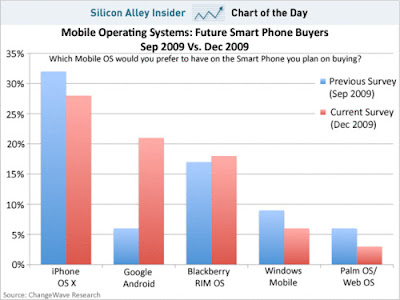 I have made my statement earlier that Google Android has set his stand on the Smartphone operating systems. It looks like Google takes some beta-test on some known manufacturer like Samsung, HTC etc. giving birth to a more stable brand. And now what missing is Google’s own smartphone which timely for its Nexus One announcement. Accordingly, ChangeWave Research reports public is more excited than ever to buy an Android-powered device amongst Apple, Microsoft and Palm.

ChangeWave surveyed 4068 consumers in the first weeks of December and found that 21 per cent of people looking to buy a smartphone in the next 90 days want to buy one running on Android. That’s up from 6 per cent when ChangeWave asked people in September.

We can’t deny that Google is one of the top global brands and knowing how powerful it is on the online world, bringing its online dominance on your hand through its smartphone –is what consumers are really looking and excited for. Plus, considering Verizon is spending tens of millions marketing the Droid this shouldn’t come as surprise.

However, Apple’s iPhone remains unseated getting the 28 percent of smartphone choice, Blackberry although increased at 18 percent comes short at third place and Palm still need to cope up getting at the bottom.

Although we can’t speculate right now to what extent Nexus One and Android OS will take on iPhone’s share, Apple has grown much considering its billion downloads and thousands of iPhone applications which I think Google needs a lot of works to cope up.

Do you prefer Android-based device or you still want an iPhone? Let me know at the comment form below.