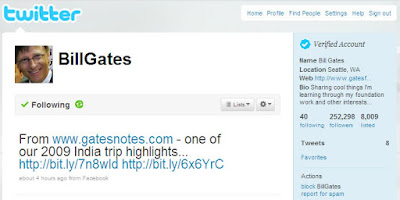 It’s a social media breakout, as Microsoft founder Bill Gates joined Twitter surpassing 100,000 followers in 8 hours that’s about 12,500 Twitter followers per hour, or up to 208 new tweets per minute. Wish that TechGeeze.com (psst! follow us on Twitter) would get same followers with the rate Bill’s followers are growing which is about 20,000 new followers per hour.

At the moment this kind of following matches Oprah’s Twitter debut. We can expect this rate to even go further as the web spread the news that Gate’s tweets is now officially live. I wonder what kind of a Twitter the richest man on the planet would be. Do you have any idea?