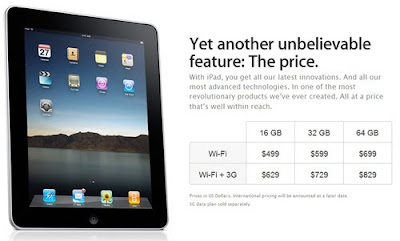 AT&T’s offering for the newly launched Apple iPad has scored a deal with $30 unlimited 3G data plan for the 3G-capable version of the device. This was same plan the iPhone have, you would also an option of 250MB plan for half the price at $14.99. There will be only an on-device activation with no store visits or calls needed and even contract on the way.

However, the idea of iPad as an unlocked device is not assumed to be like a normal unlocked mobile phones, it is just incompatible with its new “micro SIM”. It was a much smaller SIM also called 3FF SIM, this card was developed by the ETSI (European Telecommunications Standards Institute) to offer things like more storage space on-chip for provider applications, increased control and security functions and the new smaller form factor allows it to fit in tiny devices.

I think it was a craft from AT&T ditching the software lock( just like what on the iPhone), since it is possible to be hacked or unlocked while with Micro SIM it will be harder to find provider with compatible SIM card. But considering Micro SIM is a Standard, we just need some time for it to be pushed implemented, for the meantime we can expect just AT&T for this, oh I hear T-Mobile will be implementing this also.