Skip to content
TechGeeze > Apple iTablet, iSlate, or iPad: Are you excited? –Here is all you need to know 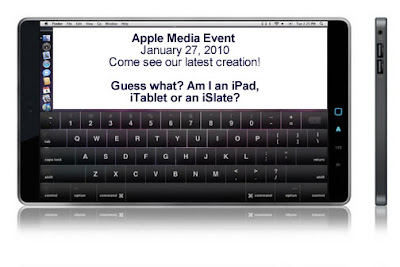 When Apple officially announced that they will be going to have their special event on January 27th speculations and rumors are just like an airborne disease spreading in the tech community. And yes we already knew that the Apple tablet is said to be a “Kindle Killer” that’s why HarperCollins is said to be negotiating for an e-Book deal. Besides that media pad is also considered to be a gaming-pad, so the gaming industry is invited in the media event. However, as if we don’t know that the said media event will focus on iTablet or iSlate or iPad, we can also waits for iLife 2010 and iPhone OS 4.0.

“Come see our latest creation”, this line on the invitation just pump up the talks of what would be highlight of that media event? Is it the iTablet or iSlate or the iPad. I think iTablet and iSlate sounds good in contrast with the iPad which sounds redundant and a bit confusing knowing iPod. I don’t know if Apple will be on iPad, since it follows Apple’s product naming “i” that is followed by “p” with iPod and iPhone. Well, it just seven days and we can expect some more leaks about the naming until Apple crack that tablet.

Unfortunately, we get too excited but the Applet tablet –but due to technical reasons it is delayed until June as opposed to March launch. According to AppleInsider, Shaw Wu with Kaufman Bros. says that Apple still deals with “minor issues” on battery life and durability.

And last few things to add, it could be Microsoft Bing to act as default search engine replacing Google since they finally both realized that world is getting smaller for their products. Giving their partnership to an end to feed a healthy competition, I think.

Conclusion, January 27th is set for everything about Apple glorious event. Come what may, as they unveiled the highest form of media tablet technology with the iTablet, iSlate or an iPad. Personally I’m not excited about it, an 11 or 10-inch is not too comfortable to carry, plus the fact that it may cause up to $1000 for me you can get an iTouch and a high-end netbook for that, or a much powerful Macbook. So I don’t know if I’ll be sad for June launch. Last, Google may be getting some bookmark if Bing will be the default browser for Apple products, but let us face it Google is equal to “Search” no more no less.