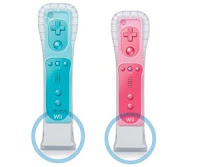 Nintendo announces the availability of two new Wiimote colors. The new color variants come in Pink and Blue color, and will be available for consumers on Valentine’s Day next year. Accordingly, those new Wiimote will also come bundled with Wii Motion Plus plugins.

Unfortunately, Nintendo wasn’t able to make the new controllers for this Holiday season, but at least we have something new to watch over next year. Interesting enough, we will have choices now that will get us out of the normal color Wii accessories that we have.

Meanwhile, Nintendo also announces new game titles for 2010 which include Endless Ocean: Blue World, an underwater exploration game with Wii Speak ability that will launch in February 22nd. Tatsunoko VS. Capcom: Ultimate All Stars is also due out for the Wii, while two new Pokemon games will be coming out for the DS. For a full list of the new games and their release dates, check out Nintendo’s press release.