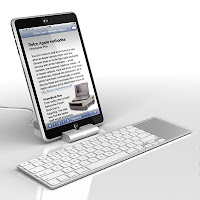 Apple doesn’t say no or even sent a gentle nod when their asked if there is really an Apple Tablet? And that’s Apple from what we know, taking each rumors into kind of promotion giving a life on its moniker on web or streets. That’s how they market their iPods, iPhones and almost everything with an “i” tagged by glowing apple. As of now, a marketable rumor has been on with the 10.1-inch Apple Tablet which is said to be on mass production by early next year.

Analysts have been making their predictions and they said the production can be as early February. Oppenheimer’s Yair Reiner has cited “checks into Apple’s supply chain” as providing sufficient evidence that the company is preparing to kick off production in February of a 10.1-inch multitouch LCD based tablet, as well as unnamed contacts who claim the Cupertino company has been approaching book publishers with “a very attractive proposal for distributing their content”.

Reiner claims that the Apple deal is definitely aimed to rival Amazon’s Kindle. According to Reiner Apple offered publishers with a 30/70 split on ebook profits with publishers taking the large share-parts. Meanwhile, Amazon is believed to demand a 50/50 split with exclusive contract to Kindle.

The analyst expect the iTablet will launch in late March or April, priced at $1,000 each and with Apple comfortably selling as many as 1m tablets per month. I love to believe this rumor, knowing Apple it’s possible, we are not behind the scene but I know there will be lot of functionalities added that it can be more than just any media pad or an ebook reader.