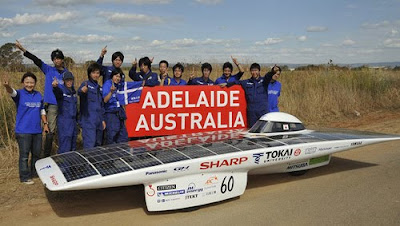 Across Australia there is green car who won over the most recent World Solar Challenge. Yes we’re not talking about those powerful sports cars but those nature-friendly solar-cars. It was a 3000km solar-car race that has been won by the Japanese team, giving an upset to four time Dutch champion. See the car above, it’s the winning piece.

Despite the flat tire, Tokai Challenger claim the World Championship completing the race in 29 hours and 49 minutes approximately with an average of 101km/h. Considering the Dutch team’s 29 hours and 11 minutes back in 2005, it is not the best time but considering some natural changes and conditions in a year to year basis this might have affected the race in a long run.