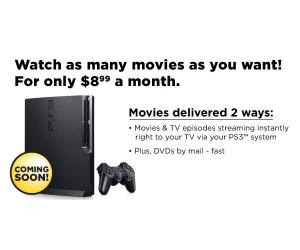 Sony has just announced that PS3 will get Netflix streaming service this was seemingly on rumors early last week. If you will look closely this was a direct assault for the Xbox 360 hit Netflix offering that has been taking some decent numbers on the sales chart for a while now.

Instantly, the streamed movies from Netflix via the Sony PS3 system will be enabled by a free instant streaming Blu-ray disc that is being made available to all Netflix members. Netflix members need to slide the disc into their PS3 systems to reveal movies and TV episodes that can be watched instantly. The free instant streaming disc leverages Blu-ray’s BD-Live technology to access the Internet and activate the Netflix user interface on the PS3 system, which must be online via Wi-Fi or Ethernet.

This Netflix movie streaming service is supposed to be launched this November.
Netflix members and PS3 system owners can now reserve a free instant streaming disc for PS3 systems by going to http://www.netflix.com/ps3.

To need a Blu-ray disc to use Netflix is a bit hassle, but on the other hand you do not need to pay an online subscribition fee like on the Xbox 360, where you need to be a Xbox LIVE Gold member ($49.99/year) is I think still a sweet deal to have.