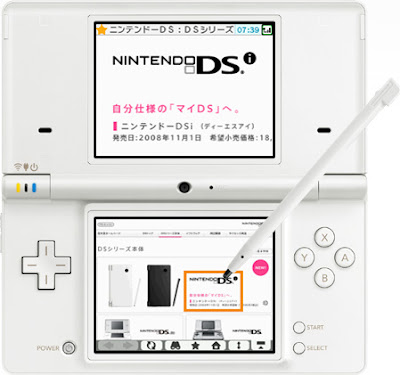 While the PSP Go has mounted the portable gaming console stories lately, it seems that Nintendo is in its own way of prepping an updated version of DSi that would likely heal the not that impressive talks but marketing wise PSP Go fever. According to Japanese financial newspaper Nikkei, Nintendo is readying their revamped version of DSi with major 4 inches screen size update.

If this will be true, the new version will have ¾ of an inch larger than the current version of the portable console. Nintendo has to do this change due to reportedly user feedback about the problem with the smaller screen of DSi.

While still we don’t hear when or if this new DSi will hit the North American shore, the updated DSi is said to be on the Japanese market later this year at ¥18,900 ($205 USD).

Frankly, I would love to see a larger screen DSi, than this supposed update would have. Hopefully Nintendo will maximize the area on top flip of the console. Maybe a laptop-like design that the flip top is the whole screen display, ditching the two speaker holes at the side. Now Nintendo, can you hear us?