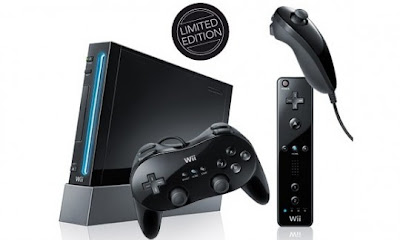 Black Nintendo Wii, are you one of those who really want to give hands on it? Knowing that it is a limited edition and currently just situated across Japanese borderline. Apparently Nintendo confirmed the black console will be available for Europe. Dated on November 6th, Eurogamers will be able to have the pack of black Wii, with matching Wii Remote, Nunchuk and MotionPlus peripherals along with copies of Wii Sports and Wii Sports Resort.

Following with the new black bundle launch, is its November 20th general availability across Europe. But until now, there are no words on the price of the new bundle. Interestingly, we heard that the company will also be including a black version of the Classic Controller Pro that will be separately sold.

Although the Black Nintendo is confirmed for Europe heading back to U.S. is a different situation where Nintendo USA is still in secrecy if there will be a limited black version of Wii. Instead last July the company issued a statement “no plans to have other colors of Wii in the US”, which seems we can wait or not –cross-fingers.