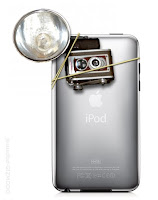 The biggest question on my mind when I’m making both the article for the new iPod Nano and iPod Touch, is why Apple picked the Nano to have the video camera instead of the Touch that decisively has the much wider screen and internet connectivity? In my search for answers, then luckily heading on Gizmodo.au gives me all I wanted to know, frankly I don’t find it that reasonable at all.

There are quite a few reasons for the iPod touch not having a camera. Speaking to David Pogue, the Steverino himself picks a couple of them:

A. Originally, we weren’t exactly sure how to market the Touch. Was it an iPhone without the phone? Was it a pocket computer? What happened was, what customers told us was, they started to see it as a game machine. Because a lot of the games were free on the store. Customers started to tell us, “You don’t know what you’ve got here – it’s a great game machine, with the multitouch screen, the accelerometer, and so on.”

We started to market it that way, and it just took off. And now what we really see is it’s the lowest-cost way to the App Store, and that’s the big draw. So what we were focused on is just reducing the price to $US199. We don’t need to add new stuff – we need to get the price down where everyone can afford it.