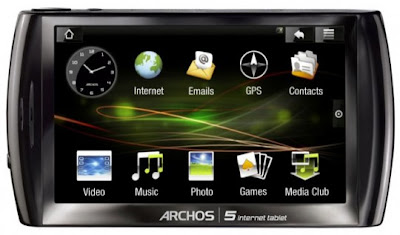 Archos world’s known for their sophisticated PMPs now goes official unveiling new Archos 5 Internet Tablet. If you’re fond of massive multi-touch screens I know you can’t ignore this but apparently we know Nokia has gone early with Maemo 5 N900, HTC Leo appears like a tight competition too with its 4.3-inch display running 1GHz Snapdragon in WinMo 6.5 platform and finally Apple is rumored cooking their iTablet, totally tough competition. But what’s Archos 5’s packed to move ahead?

Archos 5 Internet Tablet boosts a massive 5-inch screen supporting 800×480 HD resolutions and has a built-in TV recording function. These Android-based media pad is also equipped with GPS capabilities, Wi-Fi and Bluetooth connectivity together with full internet browser. The Archos 5 is also running an ARM Cortex A8 from Texas Instruments and up to 500GB of storage capacity targeted for your apps and movies.

What makes this internet tablet special is the duly announced AppsLib Store, like Apple App Store, the AppsLib Store provides access to free and paid applications for the Archos 5.

Archos 5 will be available in late September starting at £199.99 and going up to £349.99 depending on the configuration.