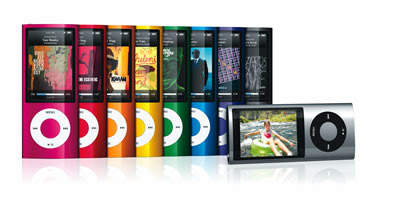 Apple introduced the new version of its world’s most popular music player today –the iPod Nano 5G. Giving it with a new glow by adding a built-in video camera, mic, speaker and larger 2.2-inch color display all packed in a stylish thin and durable glass-aluminum casing. Apparently this was just rumored recently (3.2-megapixel camera to be on nano, classic and touch) but came out only to be true for Nano and not on new iPod touch or classic.

“iPod nano is the world’s most popular music player with over 100 million sold,” said Steve Jobs, Apple’s CEO. “And now we’ve added a video camera to its incredibly thin design, without any additional cost to the user.”

We don’t know why Apple put the video camera capabilities on Nano, who wants video on such little screen? Apple should have picked iPod Touch instead, with its wider-screen and internet connectivity maximizes the video camera instead of connecting it your PC. Maybe Apple also places the thought of why you should buy an iPhone, if there will be much cheaper iTouch that almost had all the iPhone functionality?

Well, if you still want this new iPod nano that also packed a built-in FM radio with live pause and iTunes® Tagging, as well as a built-in pedometer, you can grab it in 9 brilliant colors of an 8GB model for $149 and a 16GB model for $179.