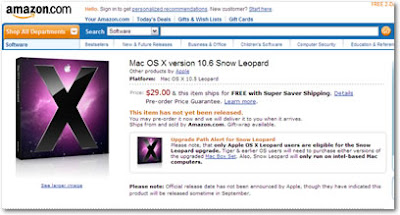 Currently available at Amazon listing is Mac OS X 10.6 popularly known as Snow Leopard and tagged at Apple’s announced price of $29 for OS X Leopard users. The targeted September release remains the same but there is no word on the official date.

Here are the offerings now available at Amazon, but be warned that Amazon has featured an “upgrade path alert” that the upgrade is available only for computers running OS X Leopard based on Intel platform.

Please note, that only Apple OS X Leopard users are eligible for the Snow Leopard upgrade. Tiger & earlier OS users will need to purchase either versions of the upgraded Mac Box Set. Also, Snow Leopard will only run on intel-based Mac computers.