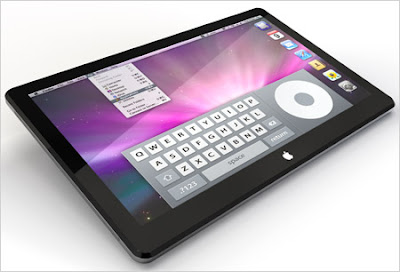 Drastically the Apple Tablet rumor has been intensified over the last weekend. The wave started last Friday in a report by Apple Insider claiming information from a reliable source that Apple is on its way on launching a 10-incher tablet computer in early next year. Now, Financial Times tops this rumor telling that Apple Tablet will be ready for this coming Holiday Season shopping.

The Apple Tablet is said to be targeted toward as an eBook reader killer, but it looks like the details depicts an entertainment device with new broad content offering for music. Financial Times claims that Apple partners up with record labels under the project codename Cocktail with aims to develop a new interactive music offering that is supposed to get consumers back to buy complete CD offerings and not just pick and choose single songs. Apple is supposed to launch new offerings that optimized with the tablet such as CD package entire background information and interactive booklets.

Well if you would gather the information together, it turns out that Apple Tablet is not targeted to be a stylish netbook or an eBook killer, but an all-around entertainment device. If Apple succeeds in placing the tablet as unique signature in the industry, this gadget could be another Apple milestone.

Imagining what could an Apple Tablet could be? It could be an interactive media tablet PC able to connect wirelessly in the internet, home stereo system, could download eBook and read it without any eye-strain, explore music album contents and compatible to share or support all iPhone or iTouch application.

One thing we can hope and seemingly to complete the Apple Tablet craze, if Apple can get the price of this new device totally affordable possibly at around $500.