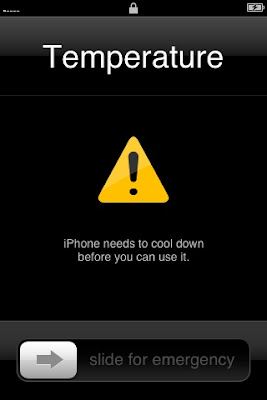 Credit: Apple
The iPhone is totally one of the hottest smartphone nowadays whether the old 3G or the 3GS and literally it does really can take to heat up to overcooked its parts inside. This issue has been officially acknowledged by Apple seemingly late as iPhone has been around for more than two years now. Apple has released a support document to address these issues.

It refers to iPhone 3GS and 3G acceptable operating temperatures and suggests users to be aware to keep the phone between 32º and 95º F when using it or between -4º and 113º F when simply storing it.

So whenever you’re playing your most loved game app, and you felt that it’s burning hot, you should let the phone cool down or else it can overheat. Overheating may cause shorter battery life, display dimming, connection loss and more.

If you would come to think of it, maybe this would be Apple iPhone’s flaws to move in as a gaming platform knowing that it would required a vast amount of processing on both video and CPU. Let’s just see what Apple next move; we can consider a hardware upgrade.

If anyone can give a shot of dissecting again the new or old iPhone to see what is the part that causes it to overheat? Or mainly its Apple fault of not designing the handset to accommodate the release its produced heat.