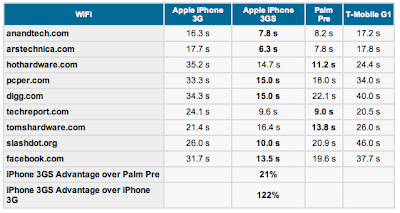 Since the last time we saw the iPhone 3G S asunder into pieces we discovered that it is then similarly running an ARM Cortex A8-based internals with is biggest rival Palm Pre. Now that both have seem the biggest similarities running under, it’s now time to put them on a test-brawl like what Anandtech’s done for a test-run.

iPhone 3G S put on an early lead with the test by loading a series web pages with 21 percent faster than the Pre and smashing 54 percent than the old iPhone 3G. We can see that 21% barrier from Pre is not that quite notable knowing that the Pre just have its 1.0 version of webOS (update has gone live now with version 1.0.3), but Engadget have likely to point out that it’s “quite notable considering the similar hardware and WebKit-based browsers”.

This series of benchmark for me is too young, what I mean is there should be more test to be done for this two, or whole like to have more comparison like what missing in the line-up is some Blackberry’s, Samsung’s and Nokia’s smartphones.

I’ll be willing to watch-out as the smartphone’s battle heat-up!