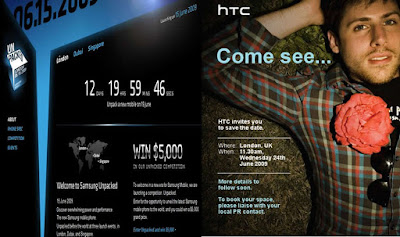 Do you notice that when a company is going to introduce another product they used to have a ‘counter’ telling i.e. “Pre is coming! Blah blah!” And it seems this June is rich with those promotional pages. As Samsung and HTC rolls out their event page that intends to lure viewers for their new phone’s story.

HTC added up their special event to be dated on June 24th. What we can expect easily is the London launch (11:30AM) of a possible first Windows Mobile 6.5 phones (Touch Pro2 and Touch Diamond2) or a new Android handset. It’s too early to claim this to be true, but will see few weeks from now as HTC rolls out the details officially.

On the other hand, Samsung just keep on striving hard to makes the most of the global market share for mobile phones. And the company seemingly doesn’t set any stop on this as they scheduled June 15th surprise special event for a new handset. We don’t have any idea what phone it is and the details don’t seems to leak anywhere.

“Sealed within a multi-layered box, the top-secret new Samsung Mobile phone will be passed between people. Each day, one person will be selected to unpack a layer of the box, winning the new Samsung Mobile phone in the process. The box will then be passed on to the next person, and so on – until 15 June, when one lucky person will reveal the phone to the world at the Samsung Unpacked launch event. Along the way, someone will also win the $5,000 grand prize.”

June the entry of Palm Pre and iPhone, will this new intros from HTC and Samsung be able to still lime light with the two that have been all around the corners of tech spotlight?