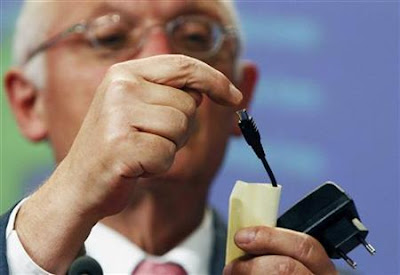 Credit: REUTERS/Thierry Roge
The top ten mobile phone manufacturers have agreed to adopt the Micro-USB connector standard chargers in the Europe. In the planned move, Apple also agreed which currently uses their proprietary dock connector compatible with both iPhone and iTouch. The dominating 90% of the market is planned to implement same charging cables by next year. This move should have been done years ago.

The Commission said the agreement would involve the creation of an EU norm, and that the new generation of mobile phones would use a standard micro-USB socket to ensure compatibility.

There are an estimated 400 million mobile phones in Europe, with 185 million bought each year.

The chargers will be usable only for data-enabled phones, which have more capability than just standard calls and SMS texts. Data-enabled phones are expected to account for almost half of all new mobile handset purchases in 2010.

The Commission hopes that as people discard their old handsets, within three to four years all data-enabled phones in Europe will be using standardized chargers.

To elaborate the plan requires new phone to be sold with Micro-USB chargers for only a period of time, making the phone and charger be sold separately in time, for the consumer be able to reuse its old phone charger.

While this phone agreement extends only for the European Union, we can expect that the standard will make its way worldwide, as the companies will try to make it cost-wise and efficient product design.