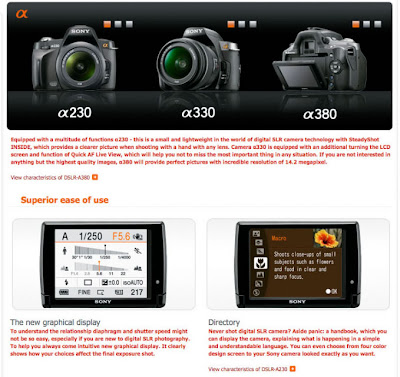 We’ve seen the Nikon D5000 get previewed, launched and now reviews are all over the net with Pentax soaring with its new K-series DSLR that is rumored to be launched this coming May 21. But, Hey! Did you forget Sony with its new Alpha 230, 330 and 380 models that are redesigns of the existing 200, 300 and 350 series?

According to Sony’s Russian website, the main update of the new Alpha series focuses mainly on the body size reduction, enhance in styling with revised user interface with built-in handbook for help on settings options and modes and HDMI image output that are compatibles with any other Sony technologies Bravia TVs specific that allows interactive display of images via the DSLR built-in software and Bravia’s own remote control to change, orient and zoom into images.

In addition according to an update on Photoclub Alpha, “the menus appear to show that two card types may be included. Sony has previously made SD/MS type dual drives which were very compact (Minolta G600 etc) and allowed card-to-card moving or copying of files. With a smaller battery, a dual drive of this type could easily be built in with bottom access.”

We can see that the integration of this new DSLR series to other Sony’s key technologies have a great advantage, knowing to see a HDMI output on your Bravia TVs or PS3. In some ways you can enjoy viewing each and every picture taken by your Sony DSLR, by far you can utilize each features of your Sony devices.