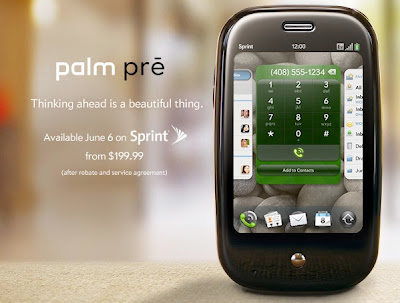 After all the rumors, finally Sprint sets Palm Pre official with June 6th release at Apple-competitive price of $199.99 after a $100 mail-in rebate with a 2 year contract. The phone will go on US-only sale at the following Sprint stores, Best Buy, Radio Shack and select Walt-Mart stores. The Pre will be available under Sprint’s Data or Business Essentials with Messaging and Data plans. Plus if you want a Touchstone wireless charging dock accessories ($49.99 dock and $19.99 Pre back cover) you can get it for your new Pre. We don’t know as of now if Pre will remain on its hype features after June 6th, but one thing is for sure –its out to battle iPhone.

I have read an article way back before about that the Palm Pre should be priced $149 rather than $199 which will play with same field with iPhone. While as we can see that at $149 it would give the Pre an edge over the iPhone and the $179 T-Mobile G1, making stronger introductory price.

So are you buying a Pre or an iPhone? Well if they are priced same, with Pre ahead of some new features let’s compare the plans they are tied-in. An individual Sprint Everything Data Plan starts at $69.99 for 450 minutes and unlimited text messages and unlimited data, including the carrier’s various services, such as Sprint Navigation and Sprint TV while AT&T first requires a $30-per-month data plan and then it’s $39.99 for 450 minutes and $20 a month for unlimited text messaging, so you’re looking at a total of $89.99 and you don’t even get the extra services. We don’t know if this will be a great factor to win customers?

Clearly, we can see a slight advantage on Pre, in terms of features and as well the plans. Will it be able to dominate the smartphone market which Apple, Blackberrys and Androids seemingly in dominance? The question remains whether the Palm Pre will actually live up to all the hype in terms of functionality and performance and continues to grow sales over the months.