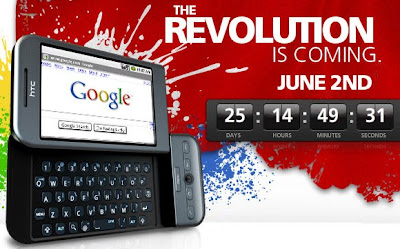 Canadian Rogers Wireless is heading up for their mobile revolution by bringing up exclusive launch for both HTC Dream and the HTC Magic –the first Android-powered mobile handsets to lands on Canada.

“Who else but Rogers would be the first carrier to offer Canadians the first chance to join the mobile revolution with a choice of not one, but two, handsets powered by the Android platform?”, said John Boynton, Senior Vice President and Chief Marketing Officer, Rogers Wireless. “The HTC Magic offers a responsive touch screen and the HTC Dream delivers both a touch screen and a slide out QWERTY keyboard. Both devices offer outstanding wireless internet search capabilities and a full suite of applications that run two times faster on Canada’s fastest mobile network.”

In addition, other than Rogers and native Vodafone HTC Magic will be heading up the United States with T-Mobile.

Rogers promises further details for the launch soon, and has an online teaser countdown “The Revolution” that will be ticking out by June 2.