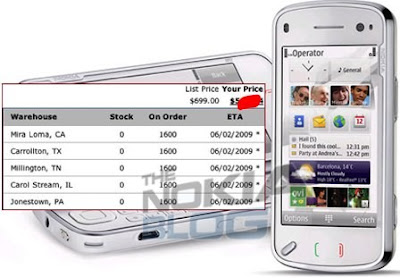 Like what the Pre is hyped, it would be really coming. There’s another phone stealing the scene –N97 as it’s predicted to be on its way for North America. It shows that Nokia has ping its North American distributors for a June 2nd release of Nokia’s flagship smartphone. We don’t see any signs of its release date to other parts of the world, but it suggest that it worldwide launch may be as follows.

The Nokia N97 suggested price is about $699, but we can expect some variations on its price that may depend on its retailers or from some of US major carriers.

We can see how the month of June smartphone ring will rambles out, with an exciting main event from Apple, Palm (with Palm Pre as usual), some Androids and with this feature-rich N97.