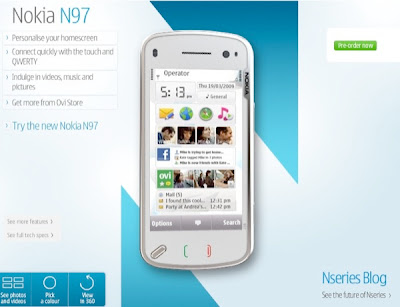 Under any doubt of buying Nokia N97, well Nokia has put up a dedicated website for its expectations of a blockbuster selling smartphone –as you know the ever popular since birth Nokia’s flagship N97. The N97’s website is interactively designed for you to know what’s the Nokia’s flagship slider with 3.5-inch, 640 x 360 pixel resistive touch-screen display is all about, prior to its expected June launch.

Ever since it’s launched it hogs lot of attentions, mainly because its features rich front of 32GB storage supports flash animation and S60 5th edition with plus of super cheap calls when it’s announced as the first Nokia smartphone to have Skype supports.

Apparently we still have some early possible disappointment on N97, as its running on an ARM 11 processor at only 434MHz, just 65MHz fraction on 5800 XpressMusic and with N97 feature-set no doubt how this speed will be eaten up in the process. Comparing its CPU speed to Palm Pre(600MHz), Blackberry Bold(624MHz) and TG01(1GHz), I won’t tell how it would be resistive enough to respond with possible user dissatisfactions. In addition, N97’s impressive price tag may tend users to expect the better possible processor.

June may take you a lot of choices, the possible next-gen iPhone and the overrated Palm Pre plus the qwertyless Android i7500, but if you think you have just save a budget and you think that N97 is for you, it’s now available for pre-order $699 phone only price on Nokia USA.