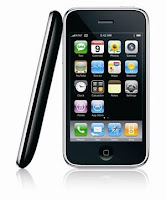 Palm Pre have officially declared war on iPhone that’s why seemingly rumored specs of the new iPhone have come up recently from a “source” that they said “closely connected to Apple’s hardware team claims to possess knowledge of the next-generation iPhone’s specifications and release date of July 17th.”

Aside from earlier rumors like the iPhone’s digital compass and video recorder it will also features twice the storage capacity, a battery life 1.5 times greater than the former one and a processor that’s supposed to be twice as fast. Here is the full spec list:

It seems that this spec seems to be believable, which terms in cause of major and minor upgrades. If this rumored specs will be true, it just come up a direct assault to Palm Pre, who is just making its entry to smartphone industry.