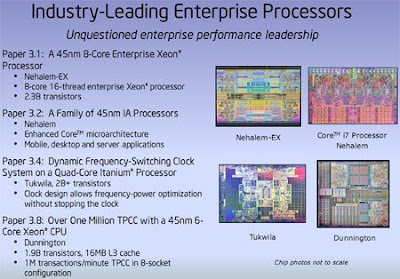 Intel will be announcing its eight-core Nehalem-EX Xeon processor next week, on May 26th. The 8-core “Nehalem-EX” Xeon processor is designed for servers that can use more than two processors, an improvement on the firm’s current model of Xeon processor.

Nehalem-EX packs 2.3 billion transistors and its eight cores are capable of executing 16 threads simultaneously. Intel’s octo-core processor has integrated power gates to keep guzzlage down, making it a powerful weapon in Chipzilla’s battle with RISC architecture.

The chip will begin shipping in systems by late 2009, early 2010. So gamer-rig enthusiast just calm your overclocking fingers until Intel rolls out this octo-cored wonder.