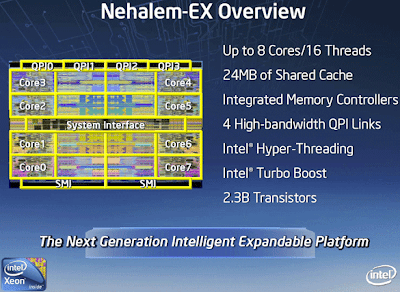 As reported earlier this week, Intel is going to gave details on the Octal-Core Server CPU Nehalem-EX the company just held a press conference to spoke about its next-gen server processor. Rising from its origins of Nehalem micro-architecture, Nehalem-EX outstripped its predecessors Xeon 5500 and Core i7 series processors. The new octal-core will be performing as much as twice the quad-core (which supports 8-threads) with support up to 16-threads through Hyper-Threading and ultimately 24MB of cache.

Here is the summary of Intel’s Nehalem-EX features according to HotHardware:

Find more of the details as HotHardware give the sneak-review of the next-generation processor from Intel, as well as the comparison from the previous series of Intel’s server processors.