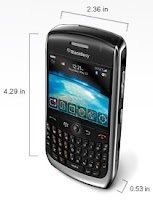 I don’t know if this will be great news for AT&T customers, certainly the carrier will be releasing BlackBerry Curve 8900 this Friday for a competitive price of $199. The question is, will anyone be interested in the Curve 8900 considering that the Pre and the iPhone are almost upon us, plus Storm 2 is luring around?

Unfortunately, Curve goes out of the curtain missing 3G reception features on its specification. Blackberry’s are known as corporate smartphones and most of private smartphone market tends to want 3G connectivity with their phones these days. In some reasons I believe this will be a bottle-neck for those customers that will be selecting with this price limit of $199, getting a Pre and an iPhone.

But if you don’t mind 3G connectivity and wanting a solid gadget like the Curve at $199 this smartphone’s functionality is a solid choice.