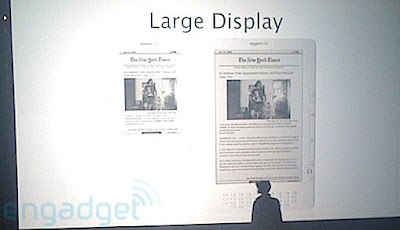 According to Engadget, who just got a sneak preview of the basic specs of the new Amazon’s Kindle DX prior to Wednesday release, the DX will have a 9.7-inch display, a built-in PDF reader and the ability to add annotations to notes and highlights.

Considering the fact that Amazon is partnering with New York Times to make it, serves a big hint that it would be a big-screen media reader, and the offerings of a $9.95 / month subscription for a virtual newspaper delivered to their reader every morning. The big-screen media also depicts that it would be fantastic for browsing the Internet swiftly and intuitively, or for using as a digital notepad that takes up less space than other bulkier devices.

After the recent February release of Kindle 2, now it’s so tiring to hear another reader from Amazon and for it will be no surprise if this reader will gain success at all, but let us see this coming Wednesday what still store for us for the new Kindle DX.

I believe that this move is a future move for New York Times, for now “people have found that they can get more information about the world for free through the Internet. And, while the Internet isn’t always the least biased or most accurate source for new information, an increasing amount of quality journalism is being done exclusively in the digital arena”.

We may find that the big industries of publications are already switching their way in the online digital journal. “Adaptation is the only way to survive.”