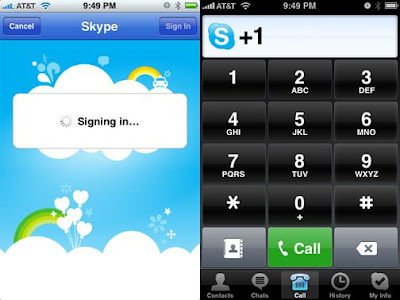 Skype announced that its highly anticipated application, Skype for iPhone, will be available on the Apple App Store beginning today. The app also adds Skype calling and instant messaging to any second generation iPod touch with a compatible headset and microphone.

“Skype software for the iPhone has been the number one request among our users. We are delighted to deliver on this request and put Skype into the pockets of millions of people around the world who are carrying iPhone and iPod touch devices,” said Scott Durchslag, Skype’s Chief Operating Officer. “Skype for iPhone will open up new ways for more than 400 million Skype users to stay connected and take their Skype conversations with them. Skype for iPhone is an experience that offers the same simplicity, ease-of-use and quality our users have come to expect from Skype, combined with an elegance of design and richness so loved by Apple’s many customers worldwide.”

According to Engadget’s update there’s some glitch on the application in terms of iPhone version:

“Update: We’re getting reports the app is crashing for jailbroken iPhones — and possibly non-jailbroken ones as well. We just got our first denial when dialing out over 3G via a popup notification, but it only happened once and we were back to old habits one call later. We did experience a brief period where no sound was coming through, but that might have something to do with using OS 3.0 and was remedied by restarting the phone.

Update 2: So far, it looks like dialing over 3G’s only working for those with OS 3.0 beta, but unfortunately all of us in that situation are now suffering from frequent crashes and loss of audio. Things seem to be going smoothly for those running the latest non-beta firmware, but the calls only work over WiFi. That said, when using the app as intended (non-beta firmware over WiFi), audio quality was surprisingly good, far better than any third party apps we’ve used.
Read Engadget”